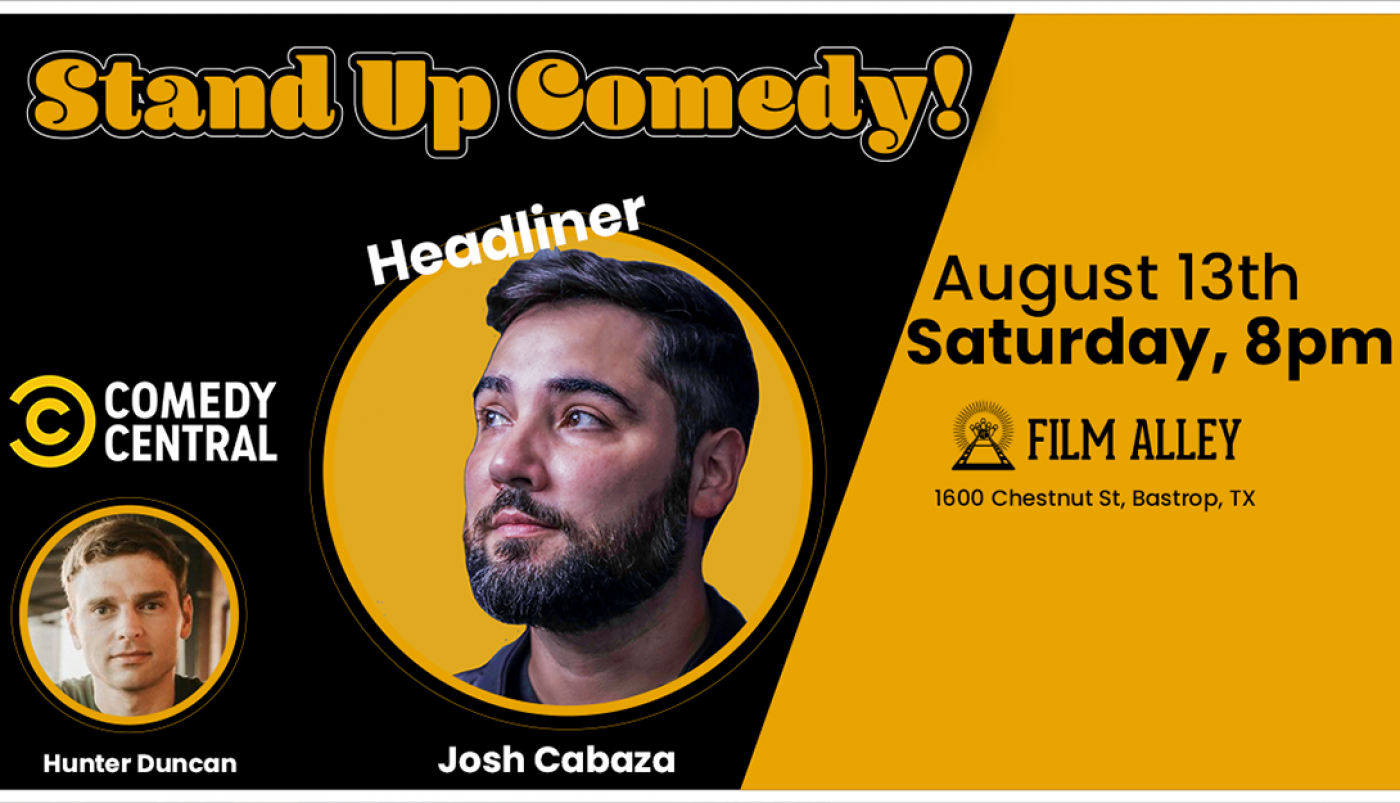 Josh Cabaza, winner of 2017 Funniest in South Texas, has a calm demeanor with outbursts of insanity delivered in a unique rhythm. He animated, and help create, "Blair & The Bear" on FMCW Studios which he founded in 2010. He also is co-creator of the international film festival Battle of The Sketches. You can hear him every week on his two podcasts Daddy Nooooo! & Willful Ignorance on iTunes & Soundcloud.

Hunter is a stand-up comedian, actor, and improviser from Austin, TX. He has been featured on Comedy Central and many national comedy festivals. “The Austin Chronicle” reader poll voted Hunter one of Austin’s best stand-up comedians. He hosts and produces several comedy showcases, including Stoned vs Drunk vs Sober, The Comedy Resistance, and ATX Comedy Hour. In 2020, Hunter ran for Congress against maligned Congressman Duncan Hunter. Hunter set the world record for “Most High Fives During The Pledge Of Allegiance” on the nationally televised CBS Sunday Morning Show, and you can see him in the upcoming films “Ultimate World” and “Lucky Doug.” 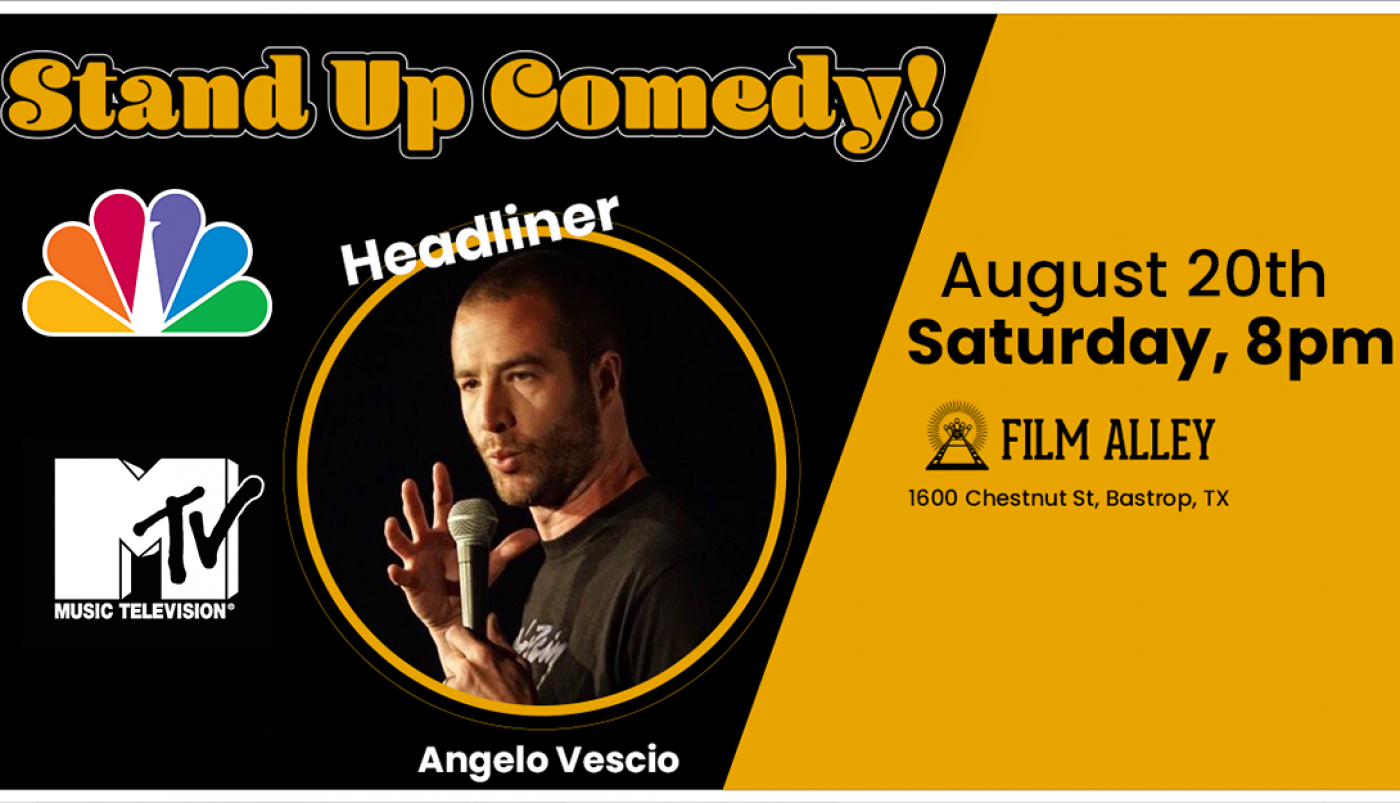 As seen on MTV and NBC, Angelo Vescio, also known by his rap moniker The Vesh, puts his own unique stamp on standup by channeling his roots as a rap artist. A well-known battle MC who has competed nationally at the legendary Scribble Jam Festival in Cincinnati, Ohio, performing in the Grindtime and No Coast battle leagues while moonlighting in comedy clubs all over the Midwest. He was recently the runner-up in the 2018 Funniest in South Texas contest and won Battle Rapper of the Year at the 2016 Twin Cities Urban Music Awards. Angelo was also featured on an episode of the MTV International show "The Brothers Green" and NBC’s “1st Look with Johnny Bananas”.

Justin Hicks is a stand up comedian based in Austin, TX. Justin was raised in small town Connecticut and has lived in Texas since 2010. Much of his comedy is drawn from his upbringing and southern experiences. He has a calm demeanor and cool delivery that is unique and easy to connect with. Justin began performing comedy in 2015 and has performed at the Bridgetown Comedy Festival (Portland, OR), San Francisco Sketchfest, and Crossroads Comedy Festival (Indianapolis, IN). 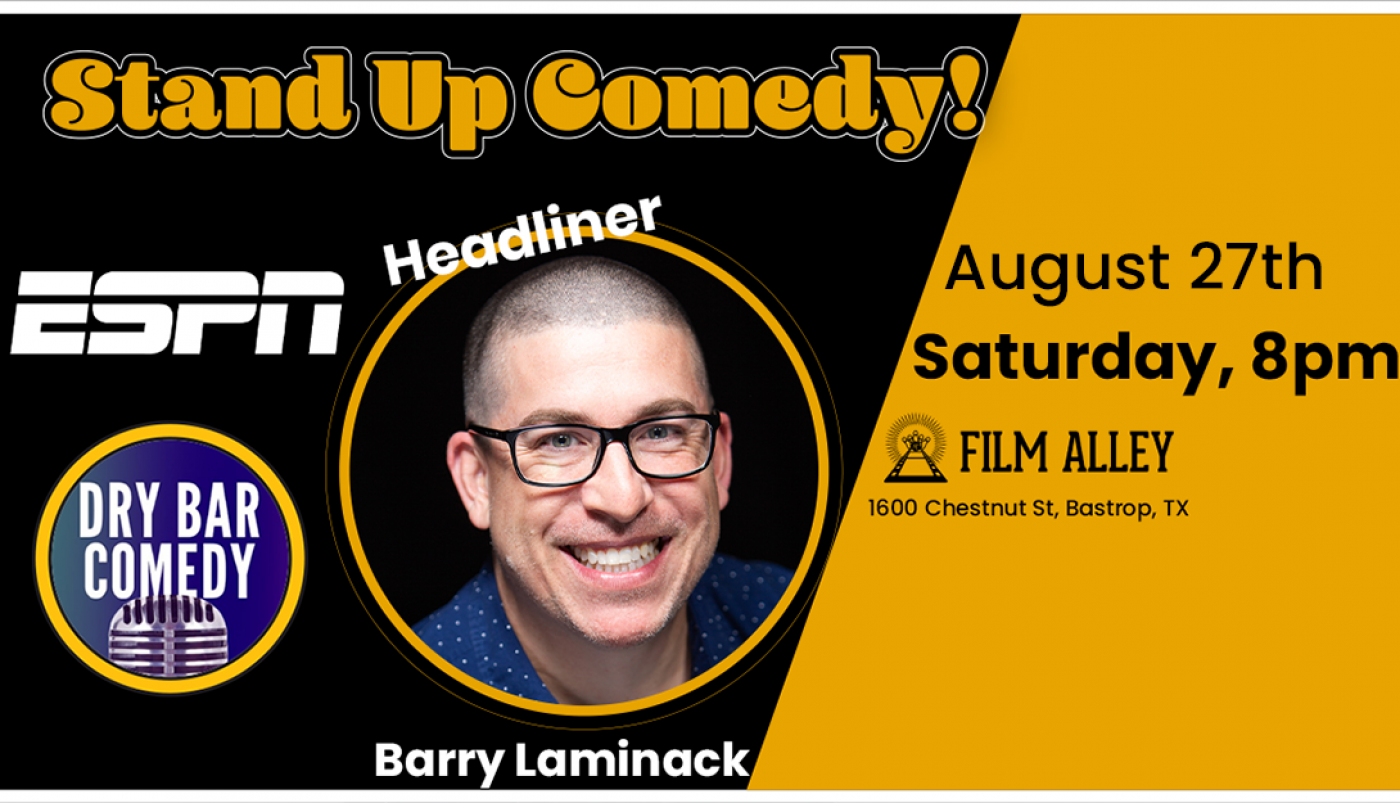 With his energetic and hilarious look at the world, Barry Laminack has captured the attention of comedy audiences around the country. From his perspective on marriage, pop culture, and life in general, to his experience going through Hurricane Harvey – nothing is off limits when it comes to his comedy.

His high energy and goofy nature make him a crowd favorite at clubs around the country.

Along with touring the nation as a headlining comedian, Barry also hosted one of the highest rated sports talk shows on ESPN Radio in Houston, hosts the sports and entertainment show “Barry On Deck” on YouTube, and is host and producer of the popular television show Houston Sports Show.

He has opened for George Wallace, Gilbert Gottfried, Big Jay Oakerson, Chris Porter, and the late great John Witherspoon (among others).

Barry recorded his first special for Dry Bar in Oct 2021 and will be releasing his first comedy album in 2022.

Come catch a show so you can say "Remember when we saw him at Film Alley in Bastrop?"

Megan Tucei is a stand up comedian based out of Austin, TX. Someone once referred to her comedy style as irreverent. After she googled that to figure out that it meant she decided she agreed. She hosts a weekly open mic called Good Egg Bad Egg at Fallout Theater. 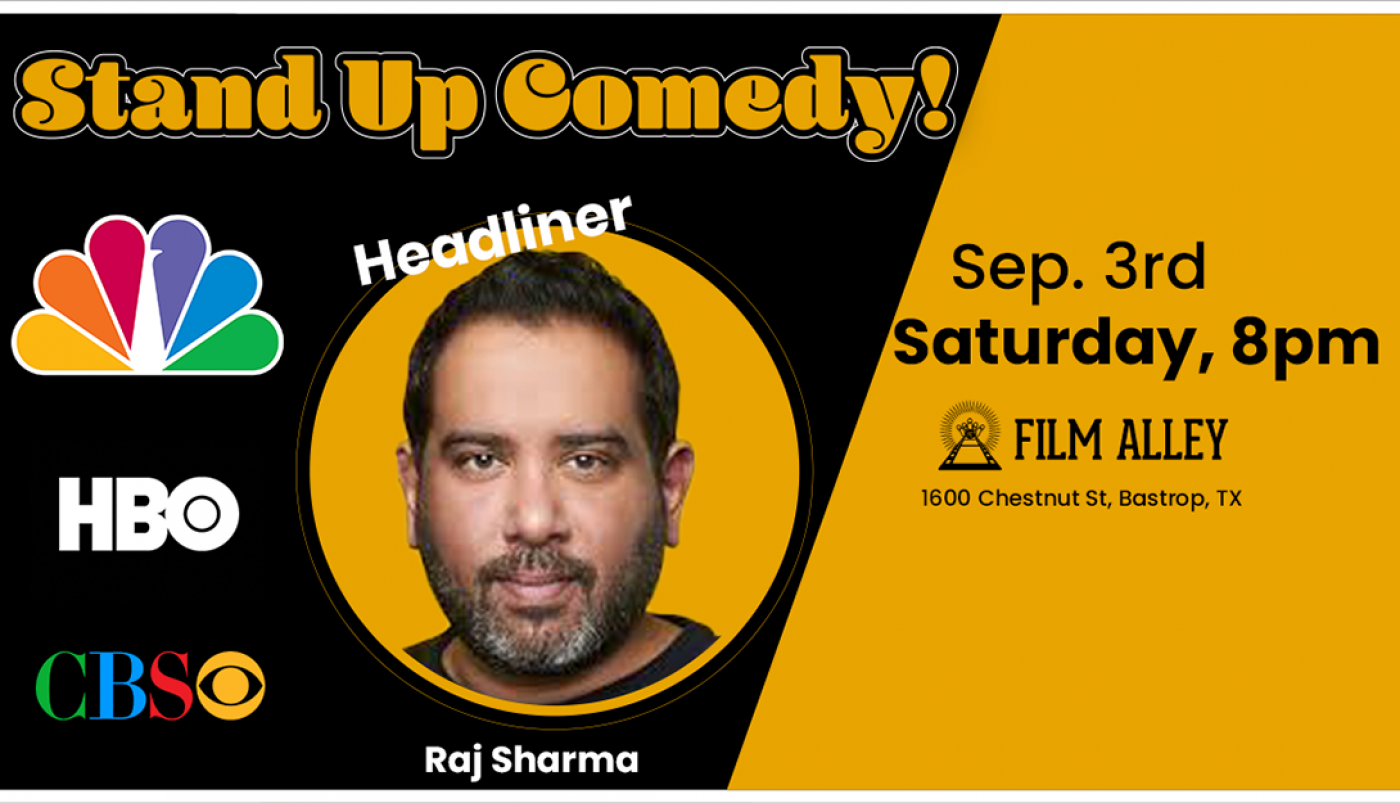 Raj Sharma started his career in Dallas, Texas, and soon began performing all over the country. He was the co-founder of Indians at The Improv, a wildcard finalist for HBO's The Lucky 21, and is currently touring with Ahmed Ahmed's Next Generation of Evil Comedy Tour. His daily observations, childhood stories, and lightning fast crowd work make him a must see for every audience. Tom Rhodes calls him "head-crushingly funny." Bryan Callen says, "He's funny in 3 languages: English, Punjabi and the Future."

Raj Sharma began his comedy career in 2002 and has never looked back. A chance trip to The Improv changed his life forever. Born and raised in Texas, and brought up in a traditional Hindu household, gave him all the influence he needed.

He is an original member of The Gurus of Comedy, Pundits with Punchlines, and The United Colors of Comedy. Eight years in and Raj has worked with some of the best comics in the business like Tom Rhodes, Carl LaBove, Pablo Francisco, Frank Caliendo, Brian Regan, Bruce Bruce, and many more.

His passion for comedy (and a lot of luck) has taken him across the country and across the globe, working in clubs and numerous colleges and corporate events.

Raj's style of humor can be enjoyed by anyone of any age or background. Hilarious everyday observations, combined with his upbringing and sensational crowd work, is what you can expect at every show.

Tito Garza is a comedian based in Austin. He has spent years on stage cracking audiences up with his playful irreverence. From unique takes on current events to engaging stories about his dumb life, he consistently delivers an engaging performance that is never short on punchlines. Tito has been featured in multiple prestigious comedy clubs around the country. He has also been seen on funny or die, NYCF and SXSW. 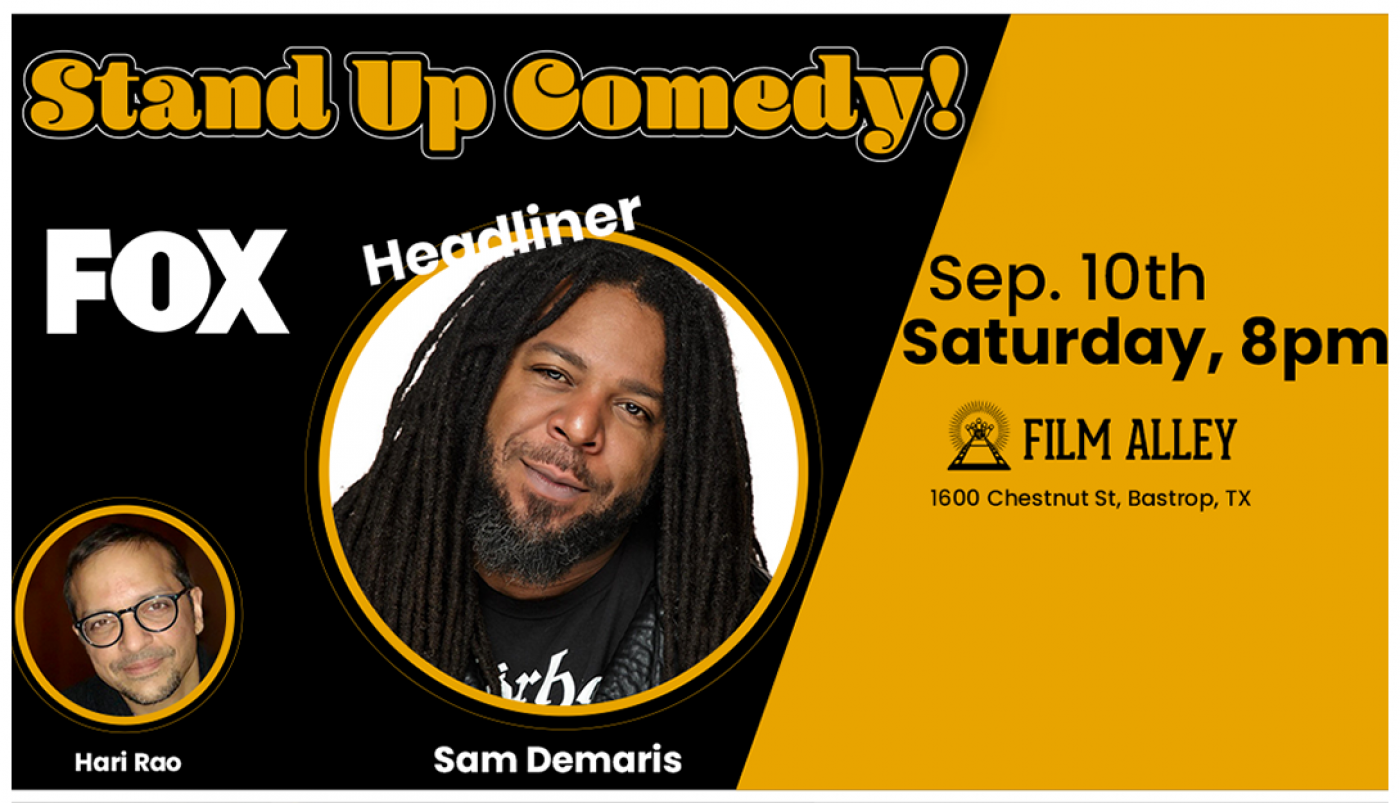 A Sam Demaris performance is fast-paced, high-energy and will often leave audiences wondering, “did he just say what I think he said?” He started his comedy career in Houston, Texas and in 2002, he took home the gold in the Houston Laff Stop’s “Houston’s Funniest Person” competition in which he beat out a total of 65 other comedic hopefuls. He had only been doing comedy for one year at the time. Since then, Sam has gone on to do countless gigs across the United States as well as a two-week tour of Iraq and Kuwait to perform for the United States Army. Sam was named one of the top 15 comedians you should be following, by Will Ferrell’s Funny or Die. Today that still rings true. His show is full of surprises for all parties involved including himself. He says, “I go on stage with a plan and I usually abandon it about five minutes in. The show’s going to go wherever it ends up going.”

Comedian. Musician. Proficient in Microsoft Excel. Hari Rao's comedy draws upon 45 years of life experience to highlight the peculiarities of everyday living that we simply accept as given, as well as dissecting his own personal experiences that can best be described as "are you being serious??". His adventure in standup began in 2017 while his experience in entertainment spans two decades as a recording artist, a reoccurring theme in his comedy (the song “Rewind” by his band I Fight Dragons can be heard as the theme song to ABC’s "The Goldbergs"). A clean(ish) comic with a tinge of absurdity, Hari has a broad appeal and has opened for a wide range of comedy club favorites including Jake Johannsen, Sam Morril, and Chris Kattan. Hari is a regularly featured performer at Zanies Comedy Clubs in Chicago. @iamharirao on Instagram/Facebook/Twitter 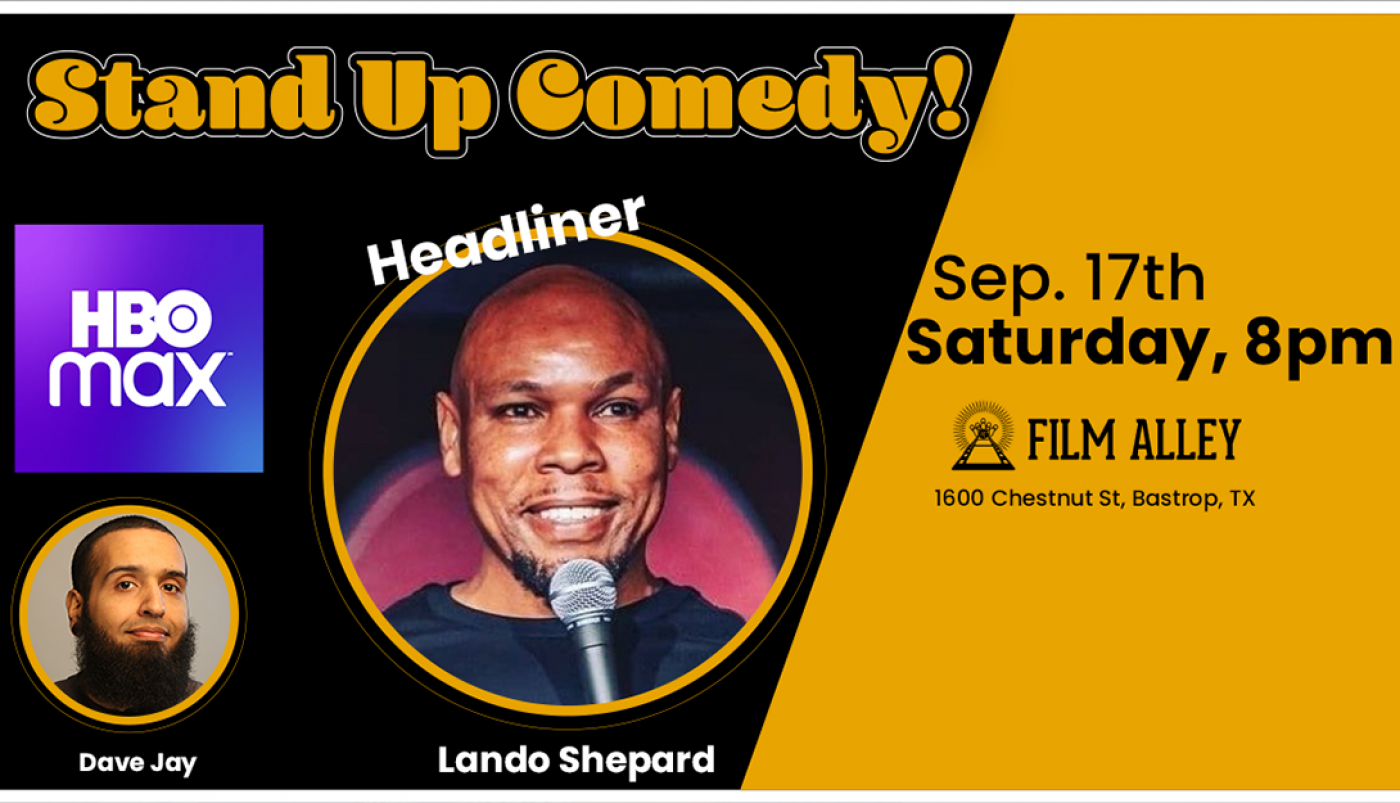 Lando Shepard is a single father of two who brings his struggles of life from parenting to his sobriety in a hilarious, but relatable way that keeps the audience captivated and entertained. Lando has performed on the Moontower Comedy Festival and has opened for Ms. Pat, Bret Ernst, Bryson Brown, Scrucho, TK Kirkland, Joe Torry, and Mark Normand.

Based in Austin, TX, you can find Dave telling jokes at comedy clubs around the country. His comedy spans fatherhood, marriage, growing up poor in rural New England, and race from the perspective of a half-Pakistani, half-Puerto Rican. Dave Jay was recently featured on HBO Max in the HA Festival, and currently tours the country opening for Steve Trevino.